'App Needs to Be Updated' Error When Updating iOS/iPadOS [resolved]

When using older versions of Kiosk Pro, the following error can be triggered after updating to iOS/iPadOS 14.3 or later: "Kiosk Pro Needs to Be Updated. This app needs to be updated to work with this version of iOS." We've heard reports from some users that if they attempt to update from this screen, the update hangs and cannot be completed. 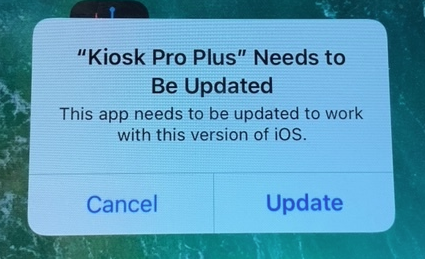 This issue appears to be related to a change Apple recently implemented regarding code signatures for security purposes:

Before you distribute an app, you apply a code signature to it. The signature certifies you as the app’s creator and enables the system to detect unwanted modifications — whether accidental or malicious — that happen after you sign your app. As a security measure, iOS refuses to launch an app with a missing or invalid signature.

If you are seeing this error, the version of the app you are working with was signed prior to the introduction of the new signature format and the previous code signature is not validating.

Resolved. Updating the app prevents this error message from being shown again.

If the update doesn't apply successfully, the only solution we've found so far is deleting and reinstalling the app through a fresh download to get the updated signature. If you purchased the app license through the App Store or used a VPP redemption code, then the app purchase is linked to the Apple ID used to purchase or redeem. You'd need to know the Apple ID/password to sign into the App Store on that device and then the app would be in your 'Purchased' tab and would be free to download again.