By default, Kiosk Pro's settings menu is shown when the app is launched.

Due to changes in iPadOS 13, Kiosk Pro will continue running in the background when it is closed using the Home button, Home indicator, or four-finger pinch gesture. Opening it again will show the app settings when using the default "On App Launch or Relaunch from Background" option. To terminate the app on an iPad running iOS 12 or later, swipe up from the bottom of the screen and pause slightly in the middle of the screen to see recent apps, then swipe up on the Kiosk Pro preview.

On Touch Gesture and Passcode

You can access the in-app settings by placing four fingers on the screen (two on each side) and holding your fingers there until a passcode prompt appears (about one second).

The touch area on each side of the screen fills the height of the content (not including the display bars) and the width varies depending on the iPad model, though the physical width is about the same:

This prompt will automatically disappear after a short period in case it has been accidentally triggered by a visitor and left open. 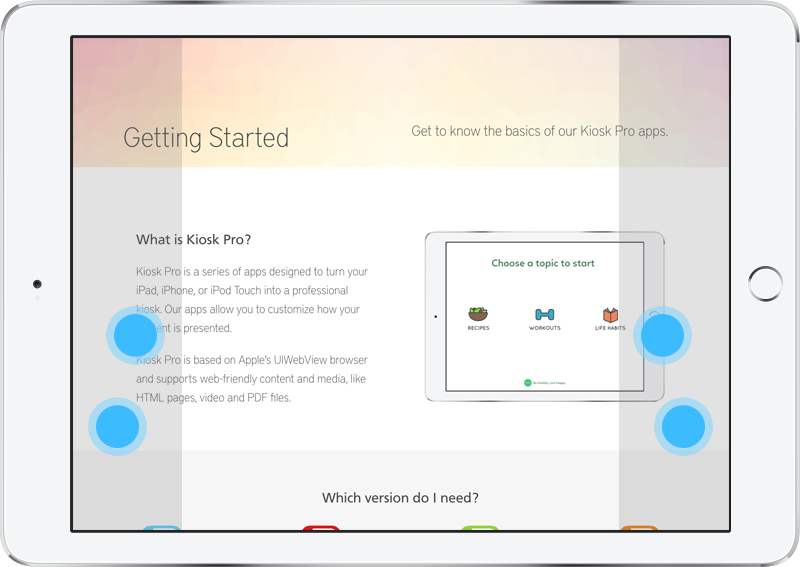 You can set in-app settings to never show, but if you do not have Remote Settings Control enabled and correctly configured, you will not be able to change Kiosk Pro's settings without deleting the app and re-installing.

This passcode protects the Kiosk Pro settings when using Show Settings > On Touch Gesture and Passcode and generally consists of a four digit string.

While we suggest a 4 digit code for simplicity, the passcode field can validate a much longer string (up to 30 characters) and accepts both numbers and letter (which are case-sensitive), allowing you to create a more secure passcode if needed.

If you accidentally set Show Settings to On Touch Gesture and Passcode, the passcode is empty by default, so you should be able to just touch 'OK' when the passcode prompt appears.

Single App Mode is similar to Guided Access, but, unlike Guided Access, retains control of the device even if the battery dies. A Single App Mode session can be started through Apple’s free Configurator software for Mac or through an MDM (mobile device management) like  JAMF Pro or SimpleMDM.

If using Autonomous Single App Mode, you must configure the app to show settings on touch gesture & passcode or use our JavaScript API calls within your content, otherwise you will not have a way to end the Single App Mode session.

For an app to successfully trigger an autonomous Single App Mode session, Apple requires that the device:

It is not possible to install a configuration profile with this key through Configurator at this time.

The process of setting up a configuration profile differs from one MDM provider to another so you may need to consult with your MDM provider’s support team to determine if they currently support profiles that include this key and how to configure that profile.

JAMF Pro includes this in the ‘Applications’ sections of a Restrictions configuration profile: 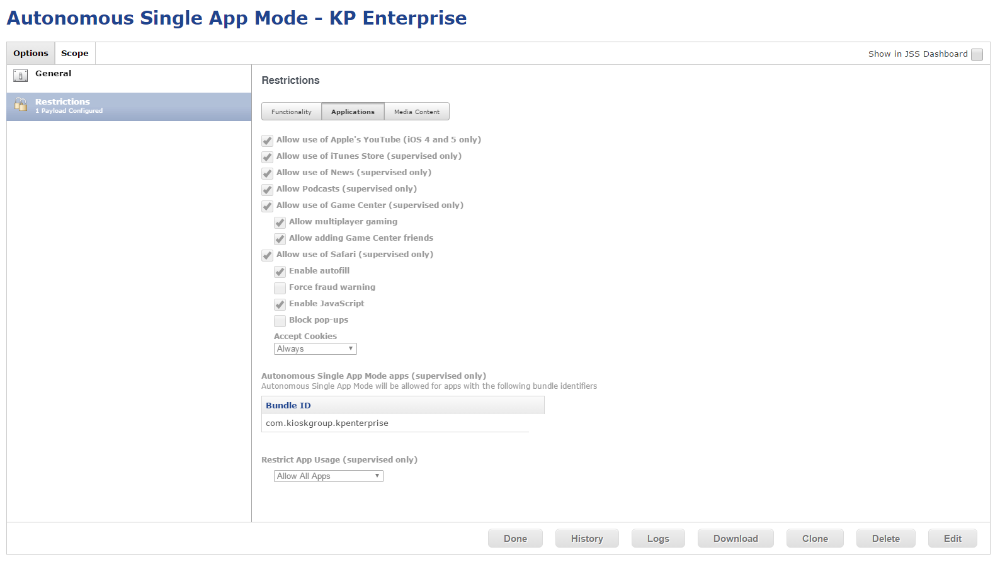 That configuration profile is then applied to a group under Devices > Groups > select the Group you are using > Configurations > Single App Lock > Select the profile you just created > Save:

In AirWatch, you'd create a new Single App Mode profile and using the filter type option at the top of the panel, select the option to list apps that are eligible to enter Autonomous Single App Mode.

This setting lets you choose when to lock the app to Autonomous Single App Mode.

Lock Manually allows you to lock/unlock the app from within the app settings (button in top right corner, see below) and will show a native alert for several seconds confirming the start and end of any session.

Lock On App Launch will automatically lock the app when Kiosk Pro is initially launched.  When launched and a session is initiated automatically, no alert will be shown (as the app can be started during app switching from another app by a visitor and notification in that instance could be confusing).  To end a session, the user would need to have access to the app's settings to tap the unlock button discussed above or a passcode to exit ASAM must be configured as discussed below

Finally, starting in our 9.1 release, the app can start or end an Autonomous Single App Mode session using Kiosk Pro's JavaScript API - more information and sample code are available here. These calls will work regardless of how this setting is configured.

This secondary passcode allows for an Autonomous Single App Mode session to be ended without allowing access to the app's settings menu. After performing the 4-finger touch gesture used to access settings, you can enter this passcode instead to immediately unlock Autonomous Single App Mode.  This can be useful for devices in the field that may lose internet connection and require that an employee be able to exit the app to get to iOS Settings > Wifi without being able to reconfigure the app itself in any way.

While we suggest a 4 digit code for simplicity, the passcode field can validate a much longer string (up to 30 characters) and accepts both numbers and letter (which are case-sensitive), allowing you to create a more secure passcode if needed.